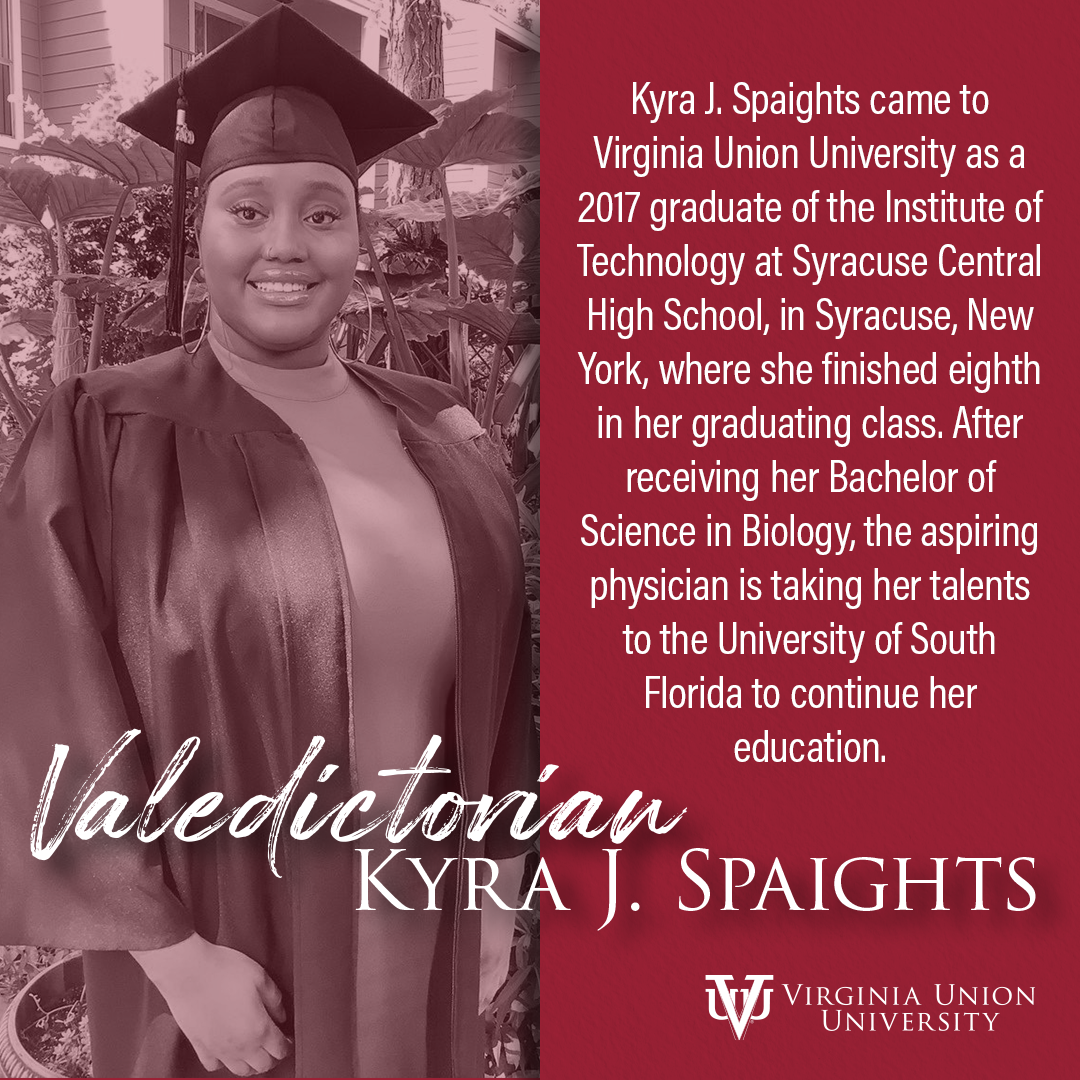 Kyra J. Spaights is a co-valedictorian for the class of 2020. Spaights came to Virginia Union University as a 2017 graduate of the Institute of Technology at Syracuse Central High School, in Syracuse, New York, where she finished eighth in her graduating class. After receiving her Bachelor of Science in Biology, the aspiring physician is taking her talents to the University of South Florida to continue her education.

During Spaights’ time at Virginia Union, she was always a standout student in the classroom becoming an honor student her freshman year and has since maintained her residency on the Dean’s List throughout her matriculation at VUU. Outside of class Spaights’ was just as popular, being so involved with Beta Epsilon Chapter of Delta Sigma Theta Sorority Incorporated. Serving as the Parliamentarian for both the Beta Epsilon chapter and Greek Council at Virginia Union as well as being an inaugural member of the Virginia Union University College for African American Women (VCAAW).

Spaights first learned about Virginia Union from a notable alumni in her life. Her Great Aunt Earlisa Roberts. A member of the 1982 graduating class, Roberts accompanied Spaights during her first college visit to Virginia Union. The love and admiration Roberts spoke with, in regards to VUU had a lasting effect on Spaights. Fast forward to 2020, and the two of them are both proud alumna.

“I’ve had a great support system comprised of family, friends, and some very amazing faculty members at Virginia Union. They constantly offered advice, words of encouragement, and inspiration to do my absolute best.

To my fellow graduates, I understand, well, that the hardest part of college isn’t always the classes, but rather the life that occurs outside of it. I know it can feel lonely, and even helpless at times. Watching the world around you continue uninterrupted. In spite of all the trials and tribulations that challenged you, you survived all your worst days to make it through! I implore you to keep surviving, beyond these hallowed grounds and dear old walls. Be a person that changes the world and let the world know that you started at Virginia Union University.

To my co-valedictorian Emmanuel and all the Class of 2020 graduates. I wish you all luck in your future endeavors. VUU Panthers forever!

With aspirations of one day becoming an Obstetrician, her goal in the medical field is to help alleviate the racial disparity in health care for African American Women. In the fall, Spaights will begin studying to obtain her Master’s degree in Medical Science and will subsequently attending medical school to complete her goal. 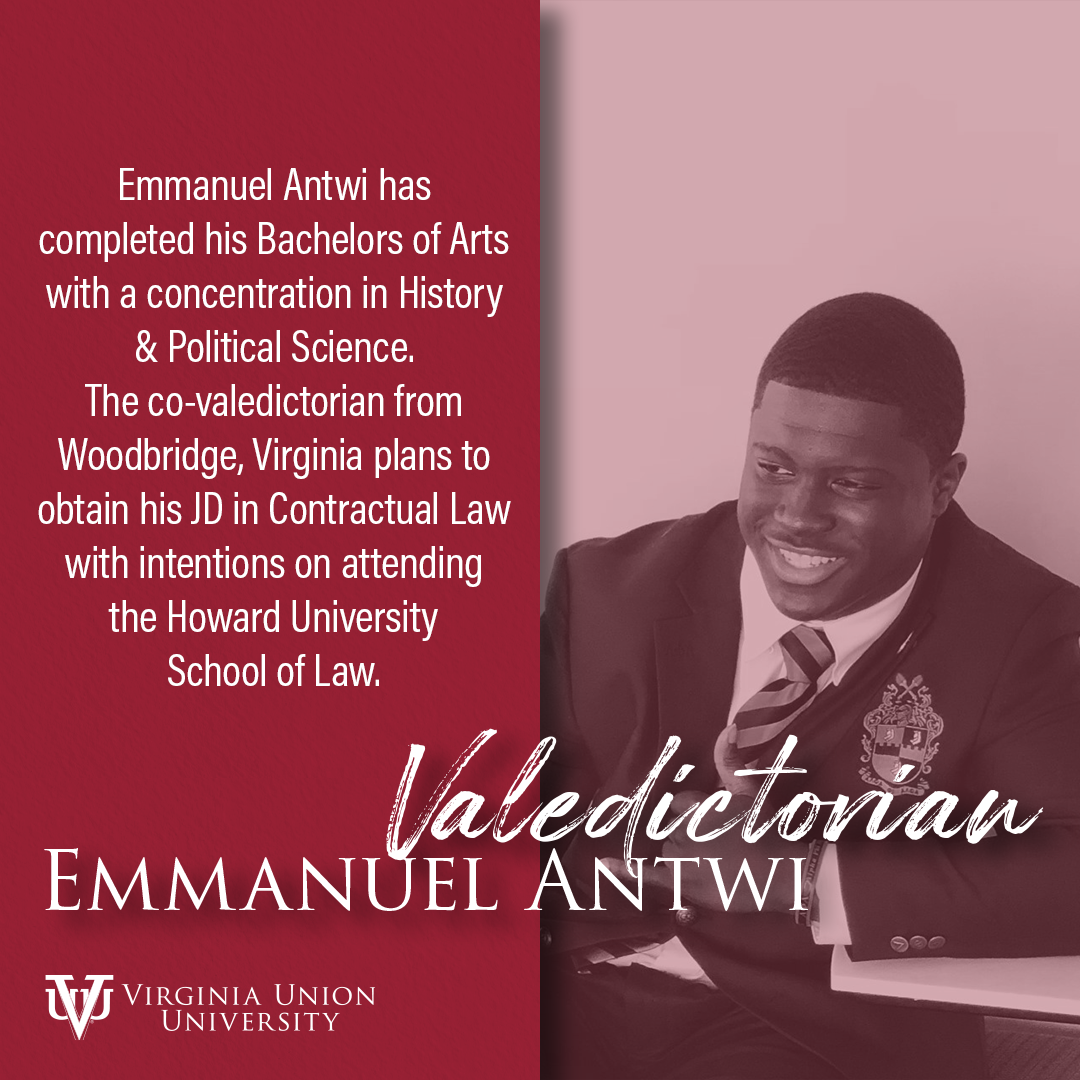 Emmanuel Antwi has completed his Bachelors of Arts with a concentration in History & Political Science. The co-valedictorian from Woodbridge, Virginia plans to obtain his JD in Contractual Law with intentions on attending the Howard University School of Law.

Antwi is inspired by the likes of individuals that have made a lasting impact on the lives and rights of African Americans such as Thurgood Marshall, Roland Burris, and VUU alum, Honorable L. Douglas Wilder.

During his time at Virginia Union, Antwi is most known as a standout Linebacker/ Defensive End for the VUU Football program. Off the field, he split his time with a number extracurricular activities.

“There are so many memories that are special to me since I first stepped foot on campus as a freshman,” said Antwi. “I’ve gained lifelong friends, granted countless networking opportunities, and acquired mentors whose lessons I will carry for the rest of my life.”

“My family, has been my biggest support system with my oldest sister Aileen and my father at the forefront. Making sure I stayed motivated, prepared, and spiritually grounded. They continuously instilled in me that time management, effort, self-discipline, and God would be the root of all my success. To my co-valedictorian Kyra, it is an honor to share this recognition and best of luck on all your future endeavors.” Antwi said.

Prior to attending Law School, Antwi has decided to take a gap year to better prepare himself for law school and focus on other endeavors that being a full time

student-athlete prevented. In that time he hopes to get engaged to his college sweetheart, while continuing to build his professional network.