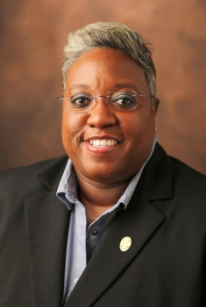 Chief” Meshia” Thomas has 20 years of law enforcement experience. She began her career with the University of Tennessee Police Department at the Knoxville campus during 2001 through 2013 as a dispatcher and rose through the ranks serving in a variety of position such as patrol officer assigned to Community Relations Unit, Sergeant assigned to Investigations, and Lieutenant assigned to patrol. She was selected on three occasions to represent serve on the Police Chief Search Committees. She has always supported the communities in which she has served and protected. Her experiences in the Knoxville community includes serving on several Boards (Sexual Assault Crisis Center and Sertoma Center) as well as the campus community (i.e. Safety Committee, Women’s Athletic Liaison, LGBTQ Ally Commission Member, and Commission for Blacks). Her role also allowed her the opportunity to facilitate and implement training and educational programs for both police and community members (such as RAD Systems self-defense, Personal Safety, Theft Prevention, New Faculty/Staff and Student Orientation).

In 2016, She joined the Vanderbilt University Police Department as a Captain assigned to Special Operations/Auxiliary Services. Her oversight and responsibilities included Fleet & Equipment Management, K-9 Team, Background Investigations, Training, Special Events, Communications and Records Unit. In 2018; she was assigned the role of Accreditation Manager/Professional Standards where she and her team helped to guide the Campus Police Department to be granted a fourth Accreditation through the Commission on Accreditation for Law Enforcement Agencies, Inc., for its Communication/Dispatch Center.

In July 2019, she began her new position with Virginia Union University.

Message from the Chief:

“On behalf of the VUU Police Department, my team and I would like to welcome everyone to our campus. I am proud to say that Virginia Union University Police & Public Safety is a diverse agency and we are

committed to providing a safe and secure campus environment where all individuals are treated with respect and dignity.

I am sure that many of you are concerned about your safety on and around campus during these uncertain times, and my team and I want to assure you that we are committed to your safety and security. We are here to support you whether you are a student, staff or faculty member or a guest at our university. Please feel free to reach out to me or my Command Staff for questions or concerns.