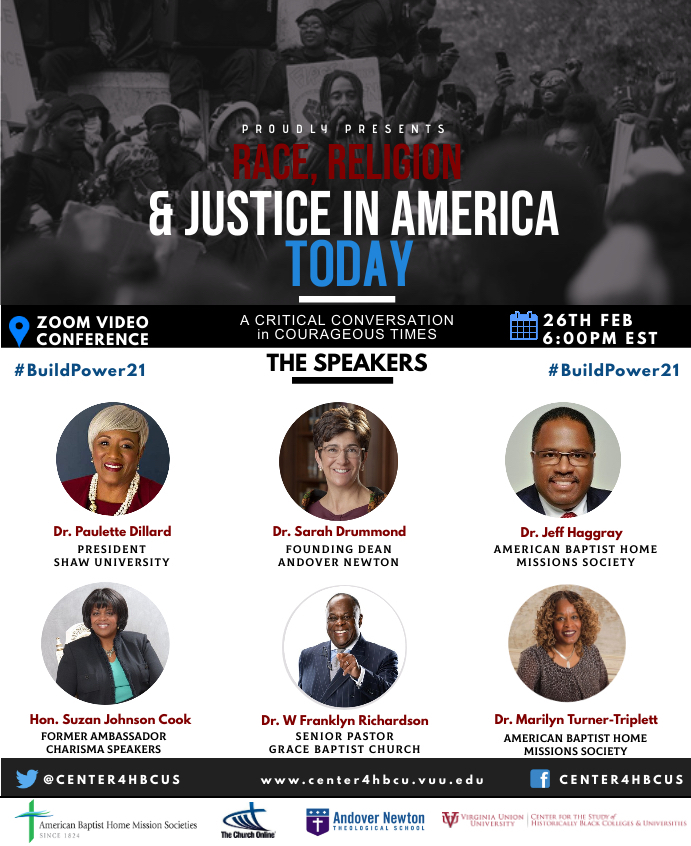 Virginia Union will conclude Build Power Week this evening with a critical conversation in courageous times entitled “Race, Religion, and Justice in America Today!” beginning this evening at 6:00pm.

Join the panel as they explore the issues facing America today. Below is a list of the panelist, join us tonight at 6:00pm to hear the expert analysis of six individuals on the front line of the fight for social justice and change throughout the nation. Panelist are as follows:

The Honorable Suzan Johnson Cook was the first female and African-American to hold the position of U.S. Ambassador for International Religious Freedom. Nominated by Secretary Hillary Clinton, and appointed by President Barack Obama, she was the principal advisor to the President of the United States and Secretary of State, for religious freedom, globally, having all l99 countries in her portfolio, and integrating religious freedom into the foreign policy and national security discussions.

Cook represented the United States in 28 countries and more than l00 diplomatic engagements, bringing faith leaders and women to the Religious Freedom table. Additionally, she has been the faith advisor to two U.S. Presidents, three cabinet secretaries, as well as political and celebrity leaders. She served as President Bill Clinton’s only faith advisor on the historic “President’s Initiative on Race”. On the front lines of 9/11, she helped New York and our nation through traumatic times, and become known as “America’s Chaplain”. In 2016, she was the only woman to run for NY’s 13th Congressional district. (chapel.howard.edu)

Dr. Dillard is a trained medical technologist certified by the American Society of Clinical Pathology and has over twenty-five years of experience working in the field of diagnostic laboratory medicine. She began her career at International Clinical Laboratories in Nashville, Tennessee. She went on to hold senior positions at SmithKline and Quest Diagnostics. She also has a rich teaching history having taught biology at various southeastern colleges and universities. (www.shawu.edu)

Sarah Birmingham Drummond is the Founding Dean of Andover Newton Seminary at Yale Divinity School. She graduated from Yale College with a major in Ethics, Politics, and Economics; Harvard Divinity School with a Master of Divinity; and the University of Wisconsin - Milwaukee with a PhD in Urban Education, specializing in administrative leadership. She is an ordained minister in the United Church of Christ.

Sarah has served Andover Newton since 2005, beginning as Director of Field Education and Assistant Professor of Ministerial Leadership in 2005. Her roles in the school changed numerous times, but her focus always centered on administrative leadership: its study, its teaching, and its execution. By the time she was called to become Andover Newton Seminary at YDS’s Founding Dean, she was a tenured professor of Ministerial Leadership and had served as Dean of the Faculty since 2011. She played a central role in the school’s becoming embedded at Yale Divinity School. (divinity.yale.edu)

As executive director of American Baptist Home Mission Societies and Judson Press, Dr. Jeffrey Haggray finds the heart of his ministry in motivating Christians to impact communities with their deeply-held faith; encouraging emerging leaders to discern and respond to God’s call; and emphasizing God’s loving concern for humanity’s well-being, wholeness and justice.

Haggray works closely with diverse national and regional partners to provide a clear vision of the Christian mission in today’s world, to cultivate relationships and to develop resources for transformational ministry with congregations, communities and regions across the U.S. mainland and Puerto Rico. (abhms.org)

A man of enormous compassion, intuitive reason, absolute commitment, and an incisive mind, Dr. Richardson demonstrates in his persona the marvelous union of passion and intellect. He is a national advocate for economic equity and his counsel and advice are widely solicited in several major corporate boardrooms throughout America. Dr. Richardson currently serves as a director or trustee for Pepsi Cola (Ethnic Advisory Board); the Harvard University Divinity School Summer Leadership Institute for Church-based Community and Economic Development; Comcast Corporation and NBC Universal Joint Diversity Council; and Grace Community Development Corporation. He is Chairman of the Board of the National Action Network; the Conference of National Black Churches; American Legacy Magazine; and Virginia Union University.

W. Franklyn Richardson is Senior Pastor of the historic Grace Baptist Church in Mount Vernon, New York. He has been the head of this vibrant, diverse, multi-staffed ministry since April, 1975. Under his leadership, the congregation has continually thrived, growing to include more than 4000 members, as well as a second church in Port St. Lucie, Florida. (http://gracechurchtoday.org/)

The Rev. Dr. Marilyn P. Turner-Triplett lives her commitment to the gospel of Jesus Christ as director of American Baptist Home Mission Societies’ (ABHMS) Community Ministries, which is comprised of Rizpah’s Children partners, Christian centers and other community ministries that are in relationship with ABHMS to heal and transform communities throughout the United States and Puerto Rico. Community Ministries partners are engaged in a wide variety of community-related healing and transformational ministries, including housing, HIV/AIDs, addiction, childhood and family services, immigration, services for veterans, outreach to returning citizens, and senior citizen programs.

In addition, she is director of ABHMS’ Rizpah’s Children initiative, which is both a part of Community Ministries and its own separate and specialized network that focuses exclusively on the issues of children in poverty. Partners of Rizpah’s Children are organizations involved in long-term strategic ministries that engage in wraparound efforts to make measurable differences in the lives of children living in poverty. (https://abhms.org/)